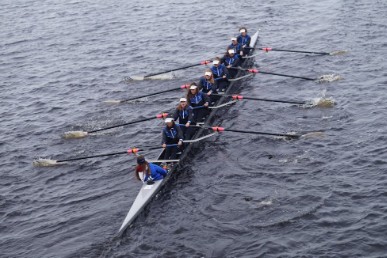 Founded in 2017 as Bucks County’s first women’s rowing program, the Rowing Team at Villa Joseph Marie has already made a big splash on the circuit. After just three rowing seasons, Villa has multiple top five ranked boats in Pennsylvania, with two of those boats in the National Top 20.

The team practices on nearby Lake Luxembourg in Core Creek Park and competes in the spring and fall at the famous Boathouse Row on the Schuylkill River, as well as on the Cooper River (Camden, N.J.) and Mercer Lake (West Windsor, N.J.), and in meets as far as Massachusetts and Ohio.

With 40 years of coaching experience guiding them, the crews compete at such prestigious races as the Stotesbury Cup Regatta, Head of the Schuylkill, Head of the Charles, Philadelphia City Championships and the National Championships. Head Coach John Musial is the top official/officiating trainer for rowing at all levels in the region. He also is a member of the board for the Dad Vail Regatta – the top college rowing event in the United States. Freshman Coach Tyler Judge rowed at Roman Catholic High School and also for Temple University, where he regularly competed in their varsity boats at Dad Vail and many other collegiate events.

Sponsor a Rower at the Crew Ergathon!

The SECOND ANNUAL Villa Ergathon is set for Friday, February 7 at 5:30 p.m. in the Villa Gym.  The Villa Rowers will “erg” 10,000 meters to raise funds for the team.  Sponsor a rower and then come out and cheer for the team.  We will have food, fun and boats on display.   Coaches will be there to answer questions too.

Perfect time to clean out the OLD!