The Foundress of Villa Joseph Marie and the Sisters of St. Casimir is The Venerable Mother Maria Kaupas, SSC, a woman of extraordinary faith and courage, who is well on the path to Roman Catholic Sainthood. Mother Maria's immortal words are our school's cherished motto...

Born Casimira Kaupas in Ramygala, Lithuania, in 1880, she came to the United States in 1897 at the request of her older brother, Rev. Anthony Kaupas, whom she served as a housekeeper. Rev. Kaupas, who had previously immigrated to the United States, was serving as pastor of St. Joseph Lithuanian parish in Scranton, Pennsylvania. It was during her four-year stay in the United States that Casimira met Sisters for the first time and was attracted to an apostolic religious life. When she told her brother of her intent to enter a congregation in the United States, he informed her that the American Lithuanian clergy sought to establish a Lithuanian congregation of women religious for the purpose of educating the youth in a Catholic setting, and help preserve the language and customs. Casimira was then asked to lead this new venture that would sustain and nourish the faith life of the early Lithuanian immigrants in the United States. Within a short time as the Congregation’s ministries expanded, this focus broadened to encompass all who came under the influence of the Sisters of St. Casimir.

Casimira spent three years in Ingenbohl, Switzerland, where the Sisters of Mercy of the Holy Cross taught and prepared her for the work to which she felt called. During this time, she asked her brother and his friend, Fr. Anthony Milukas, to find a priest who would guide the Congregation in the United States which Casimira envisioned. In 1905, the Rev. Doctor Anthony Staniukynas accepted this role as educational leader and spiritual guide.

Fr. Staniukynas succeeded in getting his bishop, Bishop John W. Shanahan of Harrisburg, Pennsylvania, to sponsor the Congregation in Pennsylvania. At the Bishop’s request, Mother M. Cyril, IHM accepted Casimira and her two companions into the novitiate of the Sisters, Servants of the Immaculate Heart of Mary at Scranton, Pennsylvania.

On August 29, 1907, the Congregation of the Sisters of St. Casimir was founded. Casimira desired that the new congregation would be named after the Blessed Mother, but Bishop Shanahan recommended that it be called the Sisters of St. Casimir to honor St. Casimir, the patron of Lithuania. He fulfilled her desire of a Marian title by naming her and her companions after the Immaculate Conception of Our Lady. Casimira received the name Sister Maria. Her two companions became Sisters M. Immaculata and Concepta.

From Scranton, Mother Maria traveled to Mt. Carmel, Pennsylvania, where Rev. Anthony Staniukynas was pastor, to prepare for the opening of the Congregation’s first parish convent and school. Mother Maria’s dream to provide a religious education for the children of Lithuanian immigrants became a reality when on January 6, 1908, Holy Cross School opened with over 70 pupils.

Within a few months, Lithuanian pastors, recognizing the depth and strength of this new Congregation of women religious toward preserving the faith life of the immigrant people, sent requests begging for Sisters to staff their parochial schools—first in Pennsylvania, later in Chicago, and in many other parts of the United States.

Because of the large concentration of Lithuanian immigrants in Chicago and considering the advantages for the Sisters to be more centrally located, Bishop Shanahan consented to have the Sisters build their Motherhouse in Chicago. The Motherhouse was completed on February 28, 1911, and St. Casimir Academy was opened in the building on September 5 of the same year. St. Casimir Academy continued as a high school within the Motherhouse facility until 1952, when the Maria High School was built to accommodate the growing number of girls seeking a Catholic education under the direction of the Sisters of St. Casimir.

Mother Maria remained in the office of General Superior for 27 years—from 1913 to her death in 1940. During her administration, the Congregation grew in membership and in expanding areas of ministry. For the first 20 years, the Sisters of St. Casimir focused on their primary apostolate, that of education. When the United States experienced the influenza epidemic of 1918-1919, it was evident to Mother Maria that there were “too few doctors and too few to give care.” (Letter to Sr. M. Josepha, October 16, 1918).

Responding to growing health care needs, Mother Maria prepared her Sisters as nurses and administrators to staff Holy Cross Hospital, which was built in 1927, and in 1928 was completed and opened. The Congregation took ownership of Chicago’s Loretto Hospital—formerly the Frances Willard Hospital—in 1938. During subsequent administrations of General Superiors, two hospitals in Neligh and Osmond, Nebraska were staffed and later relinquished. Due to the challenges and changes in healthcare and the diminishing number of Sisters to oversee this ministry, Loretto Hospital was relinquished in 1991.

In 1916, with an element of freedom returning to Lithuania because of Czarist Russia’s pre-occupation with its own revolution, the Bishops of Lithuania wrote to Mother Maria seeking her assistance. They had heard about the great advancement she and her Sisters had made among the Lithuanian American immigrants. They wrote asking that she return to Lithuania and establish her Congregation there.

In 1920, Mother Maria sailed to Lithuania with four of her Sisters. They were given as a residence the beautiful seventeenth century historic, baroque monastery of Mount Pacis, today known as Pazaislis, outside of Kaunas, Lithuania. Within weeks new candidates arrived and the Congregation began to grow. As the Sisters increased in number, they opened schools and other institutions in various cities. The American and local Lithuanian Sisters remained and served in a variety of ways until 1934 when the Lithuanian Congregation became independent from the American Congregation in Chicago.

The 25th Anniversary of the Congregation was celebrated with great joy in 1932. Within a few months of the celebration, it became evident that Mother Maria was suffering from a malignant condition. She persevered for the next eight years with great courage as bone cancer spread. On April, 17, 1940, Mother Maria died at the Motherhouse in Chicago, surrounded by her Sisters.

It was commonly accepted among the Sisters, priests, and laity who knew Mother Maria that she was a very holy person. Within a matter of hours after her death, the newspapers carried articles titled, “Sainthood Sought for Mother Maria.” Thousands of people came for her wake and burial.

Within three years of her death a holy card was printed praying for her beatification. Soon favors received through the intercession of Mother Maria Kaupas were recorded. Tireless efforts ensued on behalf of her Sisters to preserve the memory of her heroic virtuous life as it was noted in her dealings with the Sisters and the laity, and as found in her writings, her works and her accomplishments.

John Cardinal Cody of Chicago was present for the New Year Holy Hour in 1979 and within his homily he spoke of Mother Maria as a Saint. Shortly after that he assisted and gave his support to Sr. M. Joanella Fayert, General Superior, to begin the process for Mother Maria’s beatification. In 1986, when the necessary materials were compiled and the 45 witnesses were interviewed, Joseph Cardinal Bernardin requested of Rome a formal approval of this work. This was granted and Mother Maria was named “Servant of God” by the Sacred Congregation for the Causes of Saints.

In October 2009, the Congregation for the Causes of Saints in Rome completed the reading of the “Positio,” the book on the heroic, virtuous life of Mother Maria Kaupas. The nine theologians given the assignment gave a unanimous positive vote. The Commission of Bishops completed their review and also gave a unanimous positive vote regarding the “Positio” in May 2010. Their results were presented to His Holiness, Benedict XVI. Upon his approval of the Positio, Mother Maria would be named “Venerable.”

On July 1, 2010, the Congregation for the Causes of Saints announced that Mother Maria be named “Venerable.”

Upon attaining the title of “Venerable,” the Congregation for the Causes of Saints began to review the documents containing information regarding a proposed miracle through the intercession of Mother Maria. After careful examination of this material, and approval by three Rome physicians, Venerable Mother Maria will be proclaimed “Blessed.”

For more than 20 years, a monthly Mass praying for the beatification of Venerable Mother Maria has been offered in the Sisters of St. Casimir Motherhouse chapel. Attendance continues to grow as favors are received through her intercession. All are welcome to attend.

O loving Jesus, we beseech You, grant that Your servant, Mother Maria, who was imbued with Your Eucharistic Presence while on earth, may through the intercession of Your Immaculate Mother and Saint Casimir, be glorified by visible signs and miracles; so that for Your glory and salvation of souls, she may, by Your power, be declared Blessed. Amen.

Gracious God, we praise and thank You for Your faithfulness and love. You have blessed us with the example of Your servant, Maria Kaupas, whose deep faith in Your presence, love for the Eucharist, and zeal in fostering the faith life of others continue to inspire us. Through her intercession, we pray that _____________. Help us to continue life’s journey with a heart filled with a profound faith in You and that trust which is born of love. We ask this through Jesus our Lord and the power of the Spirit. Amen.

Thank you to the Sisters of St. Casimir for providing this text about Mother Maria Kaupas! 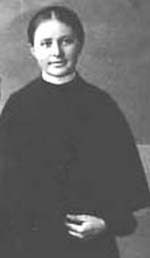 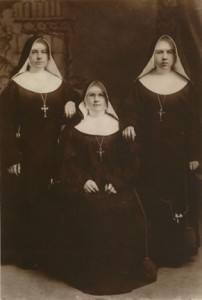